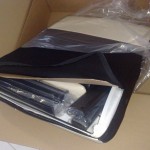 First WTF: i bought an Ikea Chair, and the pieces to build it came inside the back. Interesting…

Second WTF: This article appeared on my local newspaper, title says “Nella lite spunta la motosega”. Giving a very rough translation of the article: two car nearly had an accident, the guys on them started a babble and one guy pulled out a chainsaw. That happened near (approx 15km) from my place. Now I really think this is a safe place. 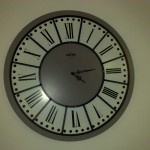 Third and biggest WTF: As my (two or three) readers will probably know, I live in Italy, a country build where the huge Roman Empire was. Thought we didn’t inherit anything good (arts excluded) from that glorious empire, we sometimes still use roman numbers, usually in clocks. The clock in the photo is the one I bought for my new home and I liked it really much, until I realized about a number: the four. I almost had an heart attack when I saw it. How could people build a clock ith a four written like IIII instead of IV??? 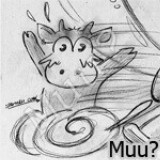 Psst! Hey you! Wanna have a little chat? Join the Discord community at https://discord.gg/ufRdaHMw6U!