Holidays are gone. For me they didn’t even start, I kept working on my big project: going the indie way.
This year I decided to take part in One Game A Month, a competition requiring to release at least twelve game a year.
I know most of them will be simple games like the ones I make during game jams/competitions but I hope to release at least one, maybe two, commercial games.
That’s it, I want nothing more from my 2013, only a bunch of games. 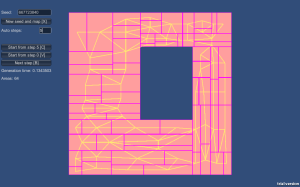 In the last two weeks I’ve beeen working on a pseudo random map generator for my next game. After discarding a big pack of work, I think I’m finally going the right direction.
The program takes a random, or user defined, seed and from there it start making a map. The map will never exceeds its borders, making it optimal for indoor map generation. From the same seed it will always create the same map, Billions maps will take the same amount of space on hard disk as two or three. This will allow player to replay the maps they like or share them with other players just by sharing sharing the map seed. In a multiplayer experience (which my game will not probably be, but who knows?) it will allow everyone on the same server to play with exactly the same nearly-infinte maps without having to send huge amounts of data over the net.

It’s still basic and I need to add some other stuff like multi-floor generation and odd building shapes. This is lots of work to do, but hey, everything has to start somewhere!
Meanwhile you can play around with it here.

I’ve completed a bunch of tools for drawing sprites from 2D tiled sheets. This is a cheap toolset (roughly 300 lines of code) and I’m sure there are better ones around, but I find it pretty fast to use in my projects and I will probably use it in my smallest 2D projects. This tool supports pixel perfect sprites and dynamic batching from sprites coming from the same spritesheet.

My tools are licensed under BDS-3 Clause and can be used freely for both free and commercial projects.

You can clone it from BitBucket or GitHub

Look next page for old versions: