Whoa! Over one year has passed since my last post.

Last month I got into 3D printing, got myself a Malyan M150, a cheap chinese i3 printer but solid enough for some hobbyist work. It has all the basic features I need plus a metal heated bed.
I’ve already printed multiple items, including a tiny penis keychain ( yes! my fist print was a penis! ), a bunch of wristwatch stands for my growing poor man’s watch collection and a bunch of precision tests: a boring cube, the same tiny boat benchmark everybody prints, a T62 tank printed at double the default speed and 0.3mm layer height and a 1cm tall figurine printed at 0,1mm height and half the speed.

Now, my along the printer came a beautiful plastic scraper I suppose to be used when removing prints. I still haven’t figured out how to correctly use it, so I’m using my old friends The Hammer and The Screwdriver to pop prints from bed, which caused an awful lot of scrapes on the paper sheet covering the bed. Looking for replacements I found out some people use different materials, including paper, glass, PEI, vinyl and glues with varying prices and qualities. Some people thought of using blue painters tape, I admit I never ever heard about BLUE tape in my whole life and I found out nobody in Italy even knows of it. I decide to put a test on light yellow tape usually found here and I bought a 3M/Scotch Tape 2214, 50mmx50m roll, capable of withstanding 60°C of temperature for at least 1 hour without degrading (there was one rated at 100°C, but the shop did not have it in stock).

I immediately put a strip to test, using a ruler to level it evenly, but my prints did not stick to this tape. After some throwaway tries I found out the bed must be heated to 70°C for the first two layers to make PLA stick, after that it can be safely cooled to 50°C. I stress tested this setting with two prints for 9 hours total and the tape still went strong, the two pieces unstuck easily when the bed cooled to room temp and I was still able to remove the tape from the bed leaving no trace behind. 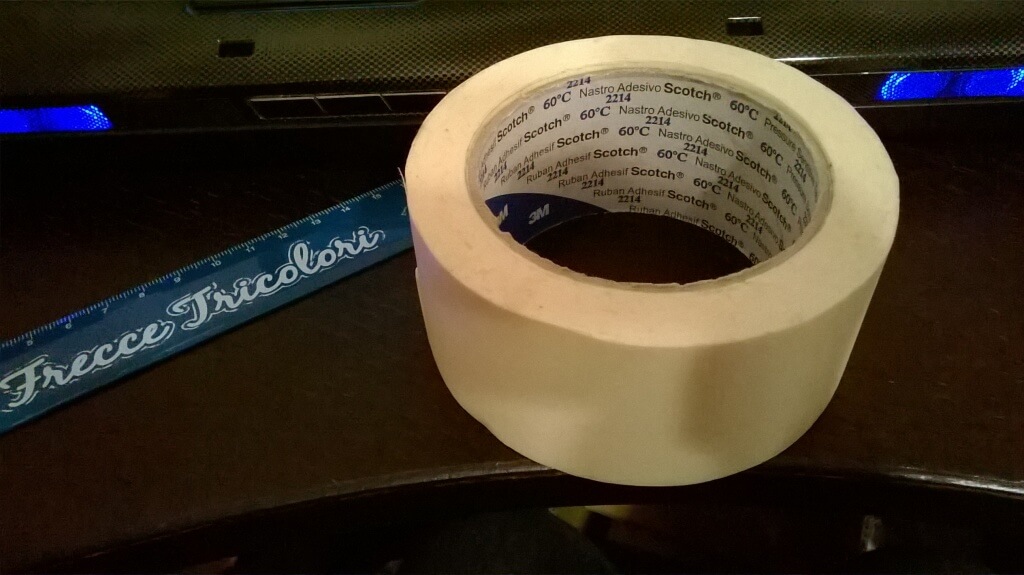